A food allergy is one type of adverse food reaction that is mediated by the immune system. An adverse food reaction may comprise any symptom following the intake of a food. Symptoms may be any perceptible change in how we feel and/or function. A symptom may present, for example, as a rash, achy joints, or fatigue.

Non-immune-mediated reactions, or food intolerance, can mimic allergic inflammation and may occur from food additives, pharmacological compounds, or enzymatic deficiency (i.e.: lactose intolerance). Immune-mediated reactions, or food allergies, are divided into IgE- and IgG (or non IgE mediated) reactions.  Below is a simple diagram to put all of this into visual perspective as defined by the European Academy of Allergy and Clinical Immunology (EAACI). 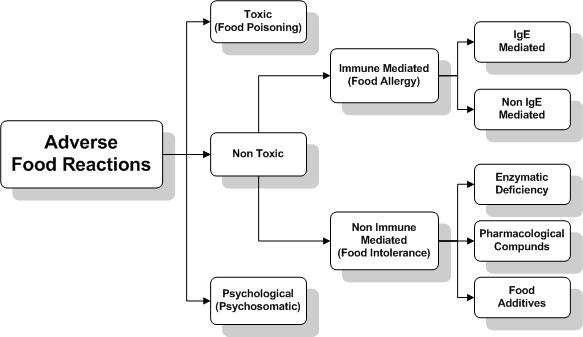 A true food allergy is not as common as you may actually think. Food intolerances are much more common in my experience. A food allergy is immune mediated, and involves a reaction to a food or drink which involves the immune system. Food allergies can be categorised into two groups, those which are more immediate (IgE responses), and those which are more delayed (IgG responses). Let’s take a look at both.

Food allergies are either immediate or delayed. In the case of an immediate reaction, it will be quite noticeable and could take place withing minutes to a few hours after ingestion of the offending substance.
The best known and most studied form of food allergies is called a Type 1 immune reaction, or IgE mediated response. Type 1 food allergies occur in less than 5 percent of the population, and mostly in children, They are also called immediate-onset, and/or atopic food allergies. These type of allergies usually occur in the genetically predisposed individual (one or both parents have an allergy), and the immune system begins to create a specific type of antibody called IgE (immunoglobulin IgE) to certain foods.

An IgE reaction occurs immediately after exposure to the allergen, a food or inhalant. The early phase reaction usually occurs as little as 15 minutes after exposure to the allergen. Other types of IgE reactions may occur 4-6 hours later and persist for days with increased inflammation including symptoms such as swelling, puffiness, redness and itching. I have often heard patients tell me that they will eat a certain food, or perhaps be exposed to a certain inhaled allergen like pollen and literally within hours have a reaction ranging from itchy skin to feeling just about completely disabled!

So what happens with these immediate responses? One side of the IgE antibody will recognise and firmly bind to the allergic food. The other side of the antibody is attached to a specialised immune cell called a mast cell, packed with histamine. Ready and waiting for action, the IgE antibody now only has to patiently wait for re-exposure to food allergens.  When you eat the allergic food is eaten the next time,  IgE antibodies hungrily latch onto the food.  Almost instantly, histamine and other allergy-related chemicals (called chemical mediators) are released from the mast cell,  bringing on various signs and symptoms rapidly.
Since this pathway occurs immediately, it is very easy to recognise a Type 1 allergy as a problem after an exposure to the irritant. This is the immunological pathway behind seasonal allergies such as hay fever. The most common test for this type of reaction is the “scratch” or “rast” test which is performed by doctors or specialists. This involves scratching the skin and applying a test substance and then waiting for a “wheal and flare response”, often a skin reaction.
The problem I find here is that this test is not always a reliable indication of an allergy, with many patients showing a “false negative” test and at times even an exaggerated positive response. The test substance may be too old to invoke a reaction or the test substance may not specific enough to the particular person and therefore does not invoke the reaction. There are simply too many reasons why this test can fail, and it does, so don’t rely on it to be “100% positive”. here are NO guarantees in this life, certainly not in immune testing so don’t rely on testing. As usual, don’t get paralysis from analysis.

The allergen and resulting symptoms are unique to the individual affected, symptoms can be very individual. However, some people don’t have any idea that they have a food allergy.
Once the potentially allergenic foods are digested and their protein derivatives enter into the bloodstream, some of these food nutrients or other food components are rejected by the body because a tendency develops of the immune systems antibodies and other related elements are to fight back. Not long after the response, allergy symptoms become apparent including swollen hands, itchy and swollen eyes, sensations of the lungs, and if acute even the closing of the larynx or throat. Anaphylaxis is the most alarming response (can’t breathe, fast heart rate, panic) and other symptoms may include stomach cramping, diarrhoea, hives, swelling, itching and various skin rashes

We call these the “Type One” toxic immune reactions, and they are quite obvious. You know when you have one because your body suffers a notable and almost instant reaction, some people can die from consuming fish or crab meat. More people die in Australia from bee stings (an IgE response) than from snake bites annually.

Non-IgE-mediated allergies involve antibodies other than IgE (e.g: IgG). Symptoms of an IgG-dependent reaction may occur hours to days following exposure to the allergen. When foods are involved, these are often referred to as “delayed food reactions”. The IgG antibody may bind to the food antigen and form an immune complex. These complexes may deposit in various tissues and trigger inflammatory reactions.
It is most unfortunate, but conventional medicine does not really recognise these types of immune responses.

These delayed food reactions are not immediate, and this can make them almost impossible to detect without sophisticated blood testing. I find it rather hard to believe that many conventional immunologists virtually ignore the IgG response, citing “lack of scientific evidence” as the main reason they won’t test for it.

Food allergies – learning what to do

Food allergies are often inter related with chronic illnesses such as arthritis, asthma, diabetes, and ADHD (Attention Deficit Hyperactivity Disorder), I have often seen changes in patient’s behaviours and emotions once the chronic allergic reactions were overcome. Dealing with food allergies whether the condition is mild, moderate, or severe, must be learned. It includes learning the causes of allergic reactions, how to recognise the onset of symptoms cause by foods or inhaled allergens, the best options for preventing and fighting food allergies, and integrating ways into your lifestyle to avoid food allergies.

Major allergens may include eggs, dairy, gluten or wheat, corn, peanuts, shellfish, fish, oranges, bananas and chocolate. My Hypo Allergenic Diet Sheet will give you good indications as to the most allergenic and least allergenic of foods. It is a handout I have used in my clinic for over fifteen years and it has helped thousands of patients over the years. You can download it and laminate it and hang it on your refrigerator.

Sufferers from food allergies can in time still eat the types of food they love, especially if they work on avoidance, food rotation and in particular to help build up their digestive system to avoid the small bowel from being too permeable to those dietary proteins which are often the real culprits in allergic responses.

It is striking how many women I have seen in my clinic who come in with a child covered in eczema, it happens on a weekly basis. The child is often covered in a red, itchy rash and will be miserable.In many of such cases, the child will have been placed on a cow’s milk formula after having been breastfed for a mere four to six weeks. This is in most all instances too young to be introduced to cow’s milk protein. Once the child starts to develop the rash, he or she will become itchy and start to scratch the skin. This may well result in a skin infection and an antibiotic is then prescribed and before you know it, the digestive system becomes even more affected by the prime dietary antigens such as milk, ice cream, peanut butter, chocolate, bananas, oranges, etc. By utilising the Hypo Allergenic Diet and dramatically improving the mother’s diet, (if the child is being breastfed exclusively), you will be well on the way to helping you child overcome eczema.

It is interesting that a conventional New Zealand medical allergy clinic will often states: “A negative prick skin or RAST test predicts with about 97% accuracy that the test food was not the cause of symptoms but only in atopic disorders and where immediate hypersensitivity food reactions are involved”. I have not found this to be the case, and have on many occasions discovered that the RAST test was not “97%” accurate at all.
According to a New Zealand Allergy Clinic the following tests are “unproven”:

I personally know of many practitioners throughout Australia, NZ and America who adopt these “unproven” techniques and other to most successfully uncover food allergies in their patients. It is foolish and naive to believe that conventional medicine has all the answers and is the only “true and scientific” way to assist patients with their allergies and other health complaints, and that the RAST test is the only true and accurate way to uncover food allergies. The ELISA blood test is in fact very accurate and there is ample research to validate this test, I have used it for over ten years and uncovered many cases of immediate (IgE) and delayed (IgG) food allergies which conventional allergists with their RAST test failed to find any allergens whatsoever. Please refer below for references with regards to ELISA testing. Click here to read more on just how effective this “unproven” ELISA test is on Wikepedia.
Always keep an open mind and have a high degree of common sense with your health care practitioner. If he or she is irresolute and dogmatic and refuses to believe that you are interested in all your treatment options, both conventional and natural (particularly if you are not getting the results you wish) then it is time to move on and perhaps pay a visit to a more open minded practitioner. Personally, I have always believed that minds are like parachutes, they function at their best when they are fully opened.

We are just beginning to develop our recipe section to containing recipes completely free from major allergens. It is easy to learn cooking and baking with low-allergy types of food yet retain the flavor, texture, and richness of “real” foods. Hypo (low) allergy dishes do not have to become boring and tasteless because you have food allergy. Look under recipes and you should find a few choice recipes, regardless of how intolerant or allergic are, there will always be plenty of good foods to eat.