The human immune system is a magnificent and well-coordinated network of cells, organs, glands, and physiological processes. Nearly every cell, organ and tissue in the body is involved either directly or indirectly in the immune process. This article is an excellent overview of your immune system. 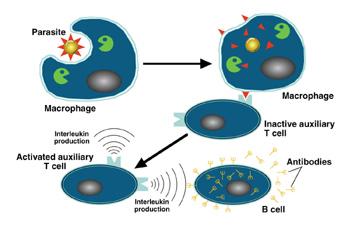 From the outside in, the skin and mucous membranes offer the first line of defence. The intact layers of skin form a magnificent and nearly impenetrable shield against most microorganisms. Mucus membranes covering the entire length of the nasal mucosa, respiratory, gastrointestinal and urogenital tracts continue this immune protection within. In addition, the hairs of the nostrils along with the sneeze and cough reflexes slow down, block and expel organisms that might otherwise infect the respiratory tract. The coordinated efforts of the cilia in the lungs, bronchia and trachea effectively remove mucus and trapped microorganisms by constantly driving them upward and into the esophagus.

Once in the esophagus the potential pathogens, along with the mucus trapping them, are swallowed into the stomach where the actions of strong hydrochloric acid combined with digestive enzymes such as pepsin and trypsin destroy the proteins in bacterial cell walls and viral envelopes, thus keeping the body from harm.
Despite this strong front line, occasionally invading pathogens do prevail and the body has to call upon a deeper layer of defenses, the leukocytes and the products they secrete. Millions of leukocytes are produced every minute in the bone marrow. From there, these highly coordinated and ever vigilant immune cells move out to circulate continually throughout the body or wait in strategic positions for the opportunity to serve. There are five major types of leukocytes (lymphocytes, monocytes, neutrophils, basophils and eosinophils); each with their own important role to play in immunity.

A portion of this elaborate network of immune defense is functional at birth (innate immunity) and the rest develops as the body interacts with the environment (acquired immunity). The leukocytes involved in innate immunity include neutrophils, basophils, eosinophils, monocytes and a sub-set of monocytes, the macrophages. These white blood cells (WBCs) circulate unceasingly from birth to death, defending the body against invaders. They have each been preprogrammed to attack anything that is not identified as part of the host body. Each cell in the body has a self-marker that distinguishes it from cells of any other plant or animal or from any foreign substance. One of the functions of the WBCs of innate immunity is to check each substance or cell they come in contact with for a self-marker. If it lacks a proper self-marker, the substance is attacked and destroyed.

The leukocytes involved in acquired immunity learn with exposure to the environment what the body needs to be protected against. Chief among these immune cells are the B and T lymphocytes, the commanders of the two major categories of learned white blood cell defense. Each is in charge of a different aspect of acquired immunity. 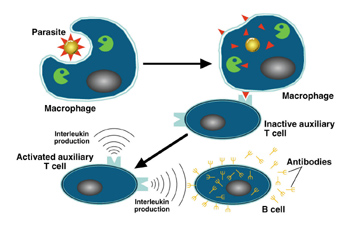 B-lymphocytes are in charge of humoral immunity, which is primarily concerned with the manufacture and deployment of immunoglobulins. Immunoglobulins have the ability to act against what they determine to be antigens, and for this reason, these immunoglobulins are known as antibodies. In classic immunology the many different kinds of antibodies are divided into five major classes: IgA (immunoglobulin A), IgD, IgG, IgM and IgE.

Each of these classes of immunoglobulins has different functions and capabilities. For example, IgG is the only immunoglobulin that crosses the placenta. IgM is a powerful antibody that can activate other serum components to cause a breakdown of bacteria and other foreign cells, but generates no appreciable immune memory. IgA is the major antibody found in tears, saliva and the gastrointestinal tract. IgD is the only antibody found on immature lymphocytes and IgE causes the release of histamine by mature basophils (mast cells). IgG, IgM and IgE are all involved in the immediate hypersensitivity reactions such as food or environmental allergies (Benjamani ’88).

It is convenient to think of the B-lymphocyte as the artillery of the immune system. Keeping a safe distance from the foe, B-lymphocytes fire off round after round of antibodies to destroy the perceived enemy without having any direct contact with it. In a simplified manner, the defense provided by B-lymphocytes is as follows. A naive B-lymphocyte (one that has not been exposed to a foreign substance or antigen) is introduced to a foreign antigen, most commonly a protein. Once a B-lymphocyte is exposed to this antigen, it becomes dedicated to producing IgA, IgM or IgG (but not IgD or IgE) antibodies solely against this antigen. The B-lymphocyte, now finely attuned to the presence of this antigen, causes other B-lymphocytes to be produced that are sensitive to this particular antigen making a small army of B-lymphocytes ready to spring into action the moment the antigen is detected. Once the antigen is detected, the B-lymphocytes dedicated to that antigen release a multitude of antibodies that circulate seeking this foreign antigen to which they can attach themselves. When the antibody attaches to the antigen it acts as a signaling device to recruit more antibodies, WBCs, and other implements of destruction to eliminate the perceived antigen. A different set of B-lymphocytes is needed for each antigen.

T-lymphocytes are in charge of cellular immunity. As a group they act as a command post from which most orders for the immune system flow. This part of immunity is analogous to the ground troops and involves the hand-to-hand combat so vital for the ultimate protection of the body against disease. The cellular branch of immunity is responsible for defense against the deeper bacterial infections, strong viruses, most fungi, cancer and some parasitic infections. It is the cellular immune system that is responsible for protecting the body against most chronic, disabling and fatal diseases.

A sub-group of T-lymphocytes, the T-helper cells, also known as CD4s, are the generals of cellular immunity and control the various WBCs by issuing commands in chemical codes known as cytokines. Many cytokines such as interleukins and interferons have profound effects on other WBCs including their fellow T-lymphocytes, B-lymphocytes, and the two WBCs most involved in direct combat – macrophages and killer cells. By secreting a variety of these chemical codes or messengers, the T-helpers coordinate the combined efforts of the WBCs to contain and destroy any non-self substance detected. Without the T-helpers, the deeper immune responses that keep the body healthy would be unable to function as swiftly and as effectively as they do.

In order to keep the battling WBCs from overreacting, another type of lymphocyte known as T-suppressor or T-8 cells secrete counterbalancing cytokines to down-regulate the destructive activities of cytokines from other WBCs. This keeps them from destroying the host along with the foreign substance. The proper ratio of T-helper to T-suppressor cells is very important because it maintains a balance between necessary aggressive action that targets the enemy and all out generalized destruction that may target healthy body cells as well.

Immunity is a hot topic, not only in standard medical and alternative health circles, but also for the person on the street. The question I am asked most often at lectures and by patients is whether there are any products that really improve immune function. To be sure, there are many substances that favourably affect some aspect of immunity. As a researcher in natural medicine, I have investigated the science as well as the clinical data for many “immune enhancers.” In the process of looking for the best among the many, I developed a set of performance criteria for their consistent evaluation.

My performance criteria for immune enhancers are as follows:

Other Factors Contributing to Immunity

Every factor that contributes to the vitality of the immune system is important to regaining or maintaining good health. No matter how effectively a therapy supports immunity, lifestyle has a decisive influence on the outcome of that therapy. If nutritional intake is not sufficient, or air and water quality is poor, or stress levels are too high, recovery cannot be expected to be either rapid or complete. Taking care of these problems may require dietary and habit change, allergy testing, nutritional supplements, environmental improvements, fitness training and psychological or stress management counseling before more focused therapies can produce the desired results.

Once the immune response has been suppressed to any significant degree, either by illness or by drugs such as corticosteroids, recovery is challenging and often requires extended time and treatment. Immune suppression adversely affects every system in the body. However, even fairly extreme cases of immune response deficiency can sometimes be
overcome with the proper therapy. For example, I had one patient whose immune system was so suppressed that she was forced to remain a virtual prisoner in a “clean” room and on a very restricted diet. After following the therapy program I designed for her, she was not only able to come out of confinement but successfully took on the lead role in a musical.

Each case is individual and has to be treated as such. As mentioned earlier, every cell, tissue and organ is involved in the immune process. This results in a variety and complexity of immune problems that no single therapy can fully address. However, the use of a general immune enhancer that meets the criteria given above can make the physician’s job considerably easier and the patient much healthier.