Capsicums are very healthy, they are also called bell peppers. Sweet and rich in vitamin C, they make an ideal main or side dish when baked with quinoa. Try this recipe! 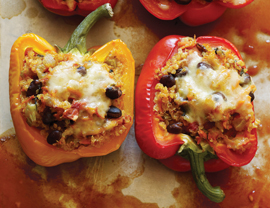 Here is a great recipe for those who are looking for an anti-oxidant rich meal. I love capsicums (bell peppers or also known as red peppers) because they taste so sweet. Try to eat them like you would an apple or pear. Capsicums are one of the healthiest vegetables you can eat for many reasons, so do develop a taste for them.

Grow them in summer, they love basking in that hot sunshine. I also find them superb when roasted in the oven, and then soaked in olive oil. This recipe utilises both buckwheat and quinoa and is protein rich as well. You will love it as much as I do I’m sure.

This is one of those dishes that tend to taste even better the next day!