The King of Fruits 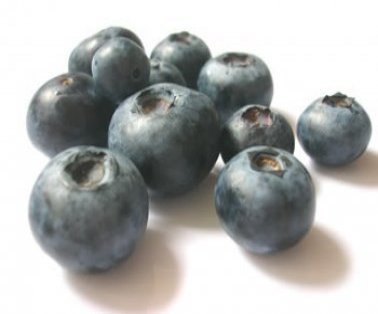 Blueberries are the fruits of a shrub that belong to the heath family whose other members include the cranberry and bilberry as well as the azalea and rhododendron. I’d say that the avocado is the the queen of fruits, and blueberries are the king. Blueberries grow in small groups or clusters and range in size from that of a small pea right up to the size of a marble. They are blue to maroon and even purple-black in color, and feature a white-gray waxy “bloom” that covers the berry’s surface and serves as a protective coating.

The skin surrounds a semi-transparent flesh that encases tiny seeds. Cultivated blueberries are typically mildly sweet, whereas those that grow in the wild have a more tart and tangy flavor.

Blueberries are native to North America where they grow throughout the woodland areas and mountainous regions in the United States and Canada. This fruit has only been recently introduced in Australia and is now widely cultivated in New Zealand. Blueberries were not really cultivated until the beginning of the 20th century, becoming commercially available in 1916.
There are approximately 30 different species of blueberries with different ones growing throughout various regions throughout the world. Several cultivars are now widely grown in New Zealand.
While blueberries played an important role in North American Indian food culture, they were not consumed in great amounts by colonists until the mid-19th century. It is interesting to note that this seems to be related to the fact that people from other countries did not appreciate the blueberry’s tart flavor, and only when sugar became more widely available as a sweetener at this time, did they become more popular.

Packed in this wonderful blue fruit is an amazing collection of antioxidants and nutrients. It’s fantastic taste aside, the saying ‘good things come out of the blue’ really does apply to blueberries. Recent research has revealed that the blueberry really does have some quite amazing health building properties. It appears the blue pigment, anthocyanin, is the major contributor to its high antioxidant levels.
Blueberries are nature’s antioxidant powerhouse and contain higher antioxidant levels than just about every other fruit and vegetable known. Antioxidants prevent cell damage that occurs from everyday wear and tear. It is believed a diet high in antioxidants helps avoid such health problems as cancers and heart disease.

The ORAC Rating was created by researchers for the USDA at Tufts University in Boston, Massachusetts. You may or may not have probably heard about “ORAC”, but what does it mean? This well-used acronym is short for Oxygen Radical Absorbance Capacity.

Scientists developed this new laboratory test to measure the oxygen radical absorption capacity of different foods and natural substances. It is now one of the most sensitive and reliable methods for measuring antioxidant capacity.

This test is one of the most popular tests being used today to rank the antioxidant potential of foods. Recent USDA research and testing has listed blueberries as number one when this test was used to study popular fruits.

Blueberries are highest in antioxidant capacity per serving, compared with more than 20 other fruits. (Source: Journal of Agricultural and Food Chemistry, 52:4026-4037, 2004)

The study showed that a one-cup serving of blueberries had higher antioxidant capacity than a serving of other popular fruits such as cranberries, strawberries, prunes, and raspberries.

This recent research by the USDA is the most comprehensive study and uses the Oxygen Radical Absorbance Capacity test because it is the most advanced way to study the power of antioxidants in various foods and substances.

Oxalates (ethanedioate) are chemical compounds that are found naturally in certain plants. If you suffer from kidney stones you may be sensitive or reacting to the oxalates found in oxalate rich plants such as spinach, rhubarb, Swiss chard (silverbeet), berries (all), quinoa, chocolate, cocoa, black tea, soy products, parsley and leeks. If you have kidney stones or are missing a portion of your intestinal tract or simply have trouble with digesting fats (because of gallbladder dysfunction), then you may need to follow a low oxalate diet.

Blueberries are among a small number of foods that contain measurable amounts of oxalic acid,a naturally-occurring substances found in plants, animals, and human beings. Oxalates can cause some concerns with people who have kidney or gallbladder problems, and these acids can even crystallise in some parts of the body. I generally advise patients with already existing ( or untreated) kidney or gallbladder problems to reduce or even avoid oxalate containing foods for some time.

Do Oxalates Interfere With Calcium Absorption?

Not really, laboratory studies have shown that oxalates may potentially interfere with the absorption of calcium from the body. Yet in several peer-reviewed research studies I have seen, the ability of oxalates to lower calcium absorption is exceedingly small and definitely does not outweigh the ability of oxalate-containing foods to contribute significantly enough to calcium loss from your healthy diet. If your digestive system is healthy, you have no yeast infection or dysbiosis  or gut fermentation and you do a good job of chewing and relaxing while you enjoy your meals, then you will get significant benefits, including the absorption of calcium from calcium-rich foods plant foods that also contain oxalic acid. Don’t worry!