Sourdough bread has more vitamins, minerals, and antioxidants than other types of bread. It also includes less phytate, making it easier for your body to absorb the nutrients it contains than normal bread. 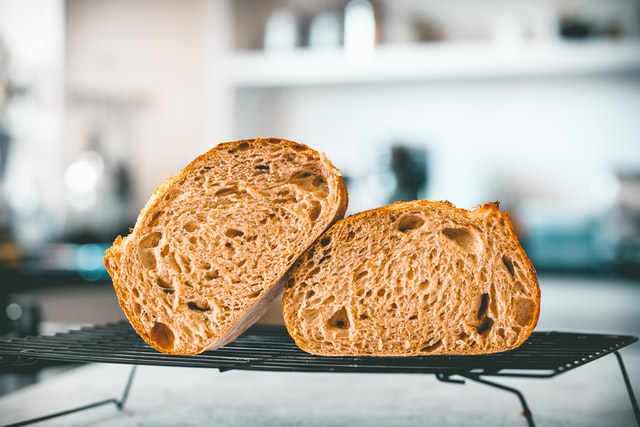 Have you ever gone out for a meal in a fancy restaurant and tried a starter? I’ll bet you were offered sourdough bread with small bowl of olive oil for dipping. Isn’t sourdough bread great/ It is so tasty, and is a perfect companion with a savoury topping.

What I like about sourdough is that it contains no sugar or yeasts which encourage the development of “bad” bacteria and fungi in your intestinal tract. In addition, sourdough bread tends to have a more gentle effect on your stomach and pancreas and does not raise blood sugar as quickly as conventional bread.

One of the main foods our patients always tend to complain about when they start on my anti-candida diet is that I recommend they stop commercial bread. I recommend this because this “food” is full of yeast (many which are still live) and sugar, two of the main things you will want to avoid when you are serious about getting rid of a yeast infection or any digestive problem.

Some people say that you must avoid ALL grains entirely, including wheat, oats, barley any rye if you want to eradicate a yeast or bacterial digestive  infection. I have found this to be not true, and have helped many people eradicate their yeast infection permanently by recommending that they stay on grains otherwise they will soon lose interest in the diet, and besides many experience fatigue and weight loss when they stop all grains (which can be dramatic and disconcerting for some).

There is no need to avoid wheat and other grains, unless you are a true celiac (diagnosed by way of blood test or biopsy, not self diagnosed) or allergic or intolerant to gluten (positive with a IgG/IgE food allergy test). Even then, just avoid wheat, rye, barley and oats but stick with quinoa, buckwheat, pea protein flour and rice, all non-gluten containing grains.

The real culprits of many a person’s digestive problems are more likely to be the amount of sugar (hidden in many foods and drinks) which people consume, along with alcohol and other junk foods and the sheer amount of stress many live under in the 21st century. Eating in front of the wide screen for example is not a good way for your digestive system to have to operate under. And then gluten is blamed!

Have you ever considered sour dough bread? Try it, it is very nice and rich in lactic acid which favours the development of lactobacillus acidophilus in your digestive system. Sourdough baking with lactic acid fermentation is much healthier than yeast baking, and is the best way to consume bread if you have a yeast infection or any digestive problem by far. This form of healthy baking makes many minerals and inositol much more readily available in various commercial cereals. You can use the sourdough ferment (unheated) as a source of live food which is very rich in probiotics.

Many people are concerned that bread like sourdough (which does contain natural and wild yeasts) will encourage their candida yeast infection. I have not found this to be the case with patients in my clinic. By being able to consume healthy and tasty sourdough bread (make it yourself) you will not be depriving yourself of that nice piece of bread for breakfast or lunch, just be sure not to put jam or honey on it! 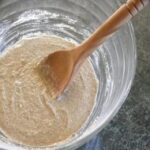 The secret to making a good loaf of sourdough lies in a concoction known as the starter. Starter begins as a mixture of water and flour and is typically kept in a loosely covered container at room temperature. After several days of feedings with additional flour and water, the mixture becomes home to thriving populations of lactic acid bacteria and wild yeast, don’t worry, we are not talking about candida albicans here!  The process of making the starter by relying on wild yeasts and bacteria is like stepping back in time; this is how all bread once used to be made. Encouraging a mixture of flour and water turn into a living ecosystem at room temperature cultivates a greater appreciation for the microbes on which we rely so heavily for the production of fermented foods. Do not make the mistake for one moment with these fermented and cultured foods folks; they are perfect for those with digestive problems and one of the best kept secrets.

Normally you save a cup of the sourdough (the starter) for the next batch, but when doing this for the first time then use instead half a cup of acidophilus yogurt or several acidophilus-bifido capsules or any other suitable source of acidophilus. You can also use some of the lactic acid rich water which you will find on top of natural, unsweetened yogurt. A good product to try also is Molkosan, use about 100mls in your starter.

If you are worried about gluten, try using buckwheat flour to make the bread stick together. There are many different recipes you can find on-line for sourdough bread, for example you may want to replace part of the rice flour with another non-gluten flour, as for instance coconut, lentil or pea flour, which you can make yourself by grinding dried coconut or seeds in a coffee grinder and putting it through a fine sieve. Just add more water as required for mixing.

I have experimented and found that a yogurt maker is a brilliant way to keep the starter warmish, this will accelerate the culture and is a very good method for making sourdough (and keeping the starter healthy) in winter time. When the mixture becomes “frothy” or has doubled in volume, it is ready to use.

Remember, sourdough is a live fermented food and tastes a little sour like yogurt. You may use it with any good spreads (but NO jam, marmalade, honey, etc!!) and in addition to salads and other meals just like you would any bread. Sourdough is very nice when dipped in olive oil, try it, you may like it. 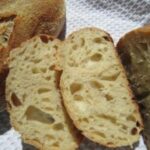 This basic sourdough bread recipe will produce approximately 2 to 2.2 kg of dough which will be more than enough dough for 2 normal sized bread tins to be about half filled. Trust me, once you make this bread you will regret that you did not make two loaves at a time because friends and family will sneak it when you are not in the kitchen 🙂  What you will find is that sourdough bread in general (because it lacks the brewer’s yeast) won’t rise as much as commercial bread. This dough however will rise very nicely nevertheless when baked and you will find that it should fill the tin.

Use a large stainless steel or glass bowl to mix the flour and starter. Place the flour in the bowl; make a small well in the middle of the flour. Then pour in the water, starting initially with half the water and then quickly adding the rest. I always keep a little water for later, just in case the dough feels too tough. Now place all the starter in the water in the well.

Mixing the Dough and Starter

Mix the ingredients (I use one hand and keep the other clean), at this stage you do not want to knead, just mix it rather roughly together. Don’t be too concerned about lumps. You will soon discover that by keeping one hand clean you can answer the phone and clean up much more easily afterwards. Add water as required if the dough feels too stiff or tough. Add the water with the clean hand; see how the vessel stays clean? If you mix with both hands you will soon notice just how messy the kitchen becomes.

I discovered this by reading many recipes on-line and trying out several, this method works really well and is the one you should try first (not after many experiments like me). Please ensure that you mix the flour, water and starter sufficiently so that the flour has absorbed all the water. This is very important before you place the bowl do to rest the mixture (after covering the bowl) for an hour.

The Kneading of the Dough

After you have let this mixture rest for an hour, sprinkle the Celtic sea salt over the mixture. Knead the dough well and in no time at all you will end up with a nice smooth and soft dough. Once the dough becomes less sticky, use the other hand as well because you will find that the dough does not tend to stick to your hand.

After this kneading, leave the ball of dough rest in the bowl for between 6 to 8 hours. It all depends on the temperature, and in winter I may place the covered bowl on the mantelpiece not too close to the fire. In summer I just leave it on the kitchen bench. You will soon get a feel for how long to leave the dough rise based on the temperatures in your house and what season it is. It can take up to twelve hours if the temperature is quite low. You are wanting the dough to basically double in size during this first proving, but it may not be achievable due to a poor starter culture or poor temperature.

Proofing for the Second Time

Once the dough is ready, take it out of the bowl and cut it into two halves. Now take each piece of dough and gently make a round shape of it, placing the seam at the bottom of the loaf. Now place these unbaked loaves in a warm and cozy place so they can recover their shape once more. Again, temperature permitting, this may take only a half an hour but in winter it could be an hour.

After the second proofing, take the dough out and place it on a bench (lightly floured). Keep the seam on the bottom and gently roll the dough into a longish cylinder. Let them rest (covered) again for a few minutes to recover. Now prepare your bread baking tins.

Ready for the Bread Tins

Very gently spray a little warm water onto the surfaces of the dough which you have formed into cylinders. Now lightly dust the surface (place flour in a sieve) and make a few diagonal slashes in the top of the dough, reasonably deep. Carefully pick up these dusted and slashed loaves (from underneath!) and place them into the oiled or buttered tins. It is best that the dough occupies about three quarters of the tin; this will allow them to rice nicely.

Finally ready to bake. Once the loaves have risen again, turn on the oven to 180 degrees Celsius. If you oven is efficiently fan-forced, you may want to reduce the temperature to 160 degrees Celsius. Your sourdough bread should bake in about an hour, maybe less, so keep a close eye on the oven. Here’s a trick – the longer you bake the break, the thicker the crust will become. Don’t go to far from the kitchen like I did once, you will end up baking a brick.

Removing Bread from the Tins

A hollow sound on the loaf will indicate whether it has successfully baked. When cooked, remove the bread from the tin and place it promptly in a bread rack to cool. How do you know if the break isn’t cooked properly? It will sound with a dull thud, and this is something only experience will give you. A bit like buying a nice watermelon, one will sound hollow (good) and another will sound hard or dull (leave this one alone). If the loaf sounds hard or dull, leave it in the oven (turned off) for a further ten minutes or so.

There are many variations on the above recipe, here is a gluten free sourdough option.