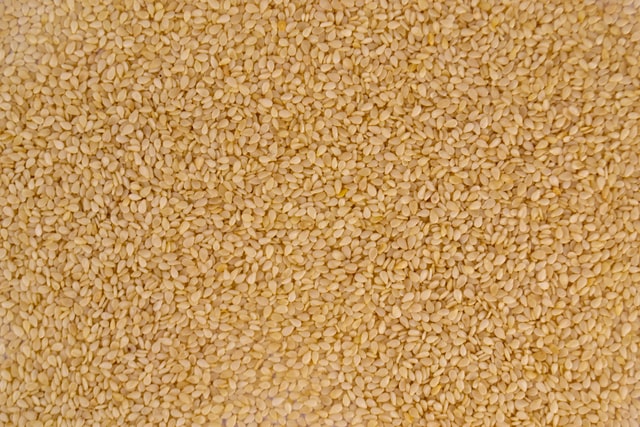 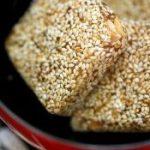 Sesame is an ancient spice, and one of the first recorded plants used for its seeds. It has been used for thousands of years and is still an oil seed of worldwide significance. Early Assyrians believed their gods drank sesame wine as a prelude to creating the world. A drawing on an Egyptian tomb of 4,000 years ago depicts a baker adding sesame seeds to dough.

Around the same time, the Chinese were burning sesame oil to make a soot for ink.
Ancient Greek soldiers carried sesame seeds as energy boosting emergency rations and the Romans made a kind of hummus from sesame and cumin. Sesame has been considered a symbol of good luck and signifies immortality to Brahmins. Sesame oil is a non-drying oil, highly stable rarely turning rancid in hot climates. It is very rich in protein, a polyunsaturated fat used in margarine production and cooking oils. Non-culinary uses include its use as an ingredient in soap, cosmetics, lubricants and medicines. In southern India it is used to anoint the body and hair. The “Open Sesame” of Arabian Nights fame, probably derives from the sound the ripe seeds make when they burst from their pods, a popping noise that sounds like a lock spring opening. Source: www.theepicentre.com

Do you have children? I can tell you, they simply love sesame seeds, especially the aroma and taste of roasted sesame seeds. You may like to make Gomashio, a very tasty Japanese condiment. I first learned about Gomashio in the late 1980’s when I was studying nutrition. Make sure you always have plenty on hand, it will quickly disappear around children who love to sprinkle it on their meals.
Sesame seeds can be used in both sweet and savoury dishes and are very versatile as a sprinkle in general. The are very high in calcium too.

Preheat oven to 200 C (400°F). Lightly oil a baking tray.
In a large bowl combine the flour, sesame seeds, baking powder, and salt. Cut in the butter.
In a small bowl combine the honey, oil and milk. Add to the flour mixture.

Gently fold ingredients together to just barely combine.
Remove dough from bowl and place on a floured cutting board. Knead about 8 times.
Roll the dough out to about ⅔ inches thick. Cut out using a biscuit cutter or a round cookie cutter.
Place on the baking sheet, biscuits should be touching.
Bake for10–15 minutes.