Maybe those snake oil salesmen were on to something way back? There may well be a therapeutic potential to the omega 3 rich snake oil after all! 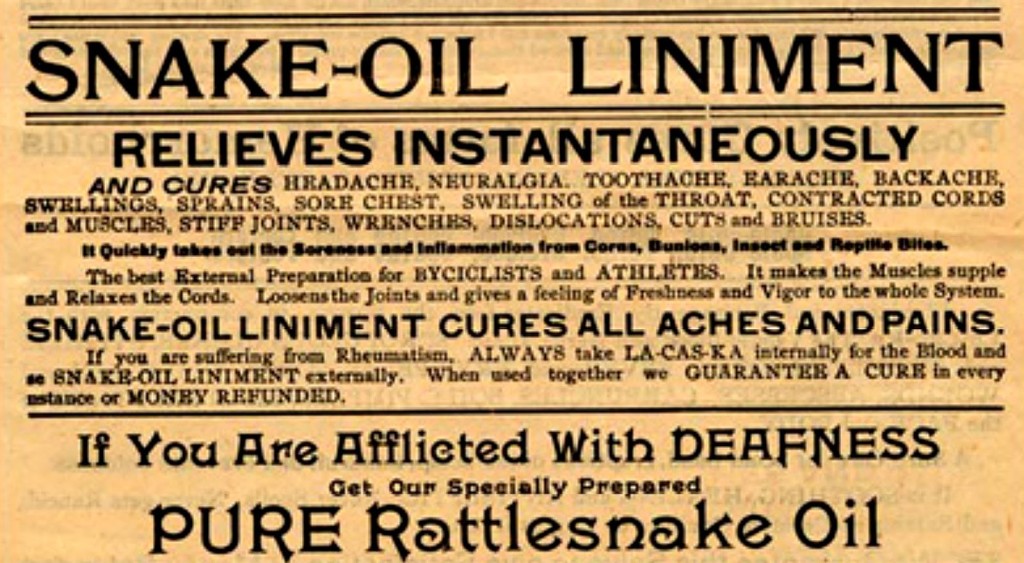 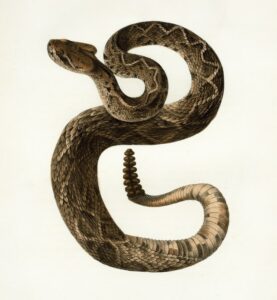 Maybe snake oil does have a real therapeutic use after all. It may even be beneficial for heart disease, depression and more. This could be a good one for the guys at the Skeptics Society.

Chinese water snakes and diamondback rattlers appear to have lots of omega 3 fatty acids, up to an incredible 20%, in their oil, meaning such snake oil might actually cure aches and pains.
Throughout the 19th century salesmen traveled the U.S. peddling solutions to all medical ills. As depicted in numerous Westerns and in Mark Twain’s Huckleberry Finn, the “doctor” was aided by a conman in the crowd who would, at the appropriate moment, call out that this medicament, ointment or tincture had solved his woes. Once the unsuspecting public had purchased the con artists’ wares, both would quickly depart before the townspeople discovered the worthlessness of the claims.
One of the most common “cure-alls” was snake oil, and its less than sterling efficacy soon lent its name as a generic to all such fraudulent hoaxes. The epithet endures: A quick search for “snake oil” on the Internet reveals that it still refers almost exclusively to something “worthless and fake”. But some of those original itinerant salesmen may have peddled actual Chinese snake oil, and those who did may not have been fraudulent after all. 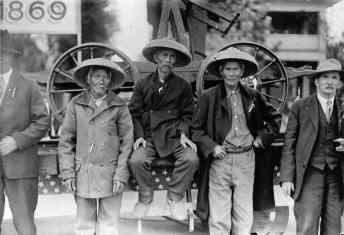 For centuries snake oil has been a traditional remedy in Chinese medicine, used primarily to treat joint pain such as arthritis and bursitis. Its introduction to the U.S. most likely occurred with the arrival of Chinese labourers who came to build the Transcontinental Railroad in the mid 1800s. They may have offered snake oil to fellow workers as relief for suffering long days of physical toil.
Richard Kunin, a California psychiatrist with a background in neurophysiology research, became intrigued with the idea of snake oil in the 1980s. He had been following early research on the importance of omega-3 fatty acids for health and it dawned on him that the much maligned snake oil might be a particularly rich source. Omega-3’s proliferate in cold-blooded creatures that live primarily in cooler environments because the fats don’t harden in chilly water like omega-6 fatty acids do (hence, the high level of omega-3’s in cold-water fish such as salmon). “Snakes and fish share one thing, they’re both cold-blooded animals,” Kunin says.

Kunin visited San Francisco’s Chinatown to buy such snake oil and analyse it. He also acquired two live rattlesnakes and extracted their fat sacks. According to his 1989 analysis published in the Western Journal of Medicine, Chinese water-snake oil contains 20 percent eicosapentaenoic acid (EPA), one of the two types of omega-3 fatty acids most readily used by our bodies. In comparison, the salmon, one of the most popular food sources of omega-3’s, contains a maximum of 18 percent EPA,  2% lower than that of snake oil!Research since the 1980s has demonstrated the necessity—and efficacy—of omega-3 fatty acids. These acids not only reduce inflammation, such as arthritis pain, but also improve cognitive function and reduce blood pressure, cholesterol and even depression.”Because of their chemical structure, omega-3’s behave very differently in cell membranes than any other fat,” says Susan Allport, author of The Queen of Fats: Why Omega-3s Were Removed from the Western Diet and What We Can Do To Replace Them. “They’re much more dynamic, they move around much more, so they allow a lot to happen in the cell membranes. And that’s where enzymes do their work. So these fats allow enzymes to work.”

Recently in Japan, a group of scientists at the Japanese National Food Research Institute led by Nobuya Shirai turned their attention to snake oil as well. In 2002, in Fisheries Science, they evaluated the composition of oil from the Erabu sea snake—the source of snake oil in traditional Chinese medicine. They analysed such snakes caught in both the Pacific Ocean and the South China Sea and determined that the amount of beneficial omega-3s in sea snakes does not vary depending on their capture location.

In a series of later papers, the most recent published in the Annals of Nutrition & Metabolism in July 2007, Shirai and his team evaluated the effects of Erabu sea-snake oil on a number of outcomes in mice, including maze-learning ability and swimming endurance. In both cases, snake oil significantly improved the ability of the mice in comparison with those fed lard.

Despite Shirai and Kunin’s analyses, snake oil retains its fraudulent feel in the U.S., perhaps because the Japanese research is not widely known and we were only beginning to understand the need for omega-3’s when Kunin published his analysis. “That study came out at the time that we were beginning to appreciate that we did indeed require omega-3’s,” Allport says. “The first medical reason people were looking at omega-3’s was for arthritis…. [But] all of our cells in our bodies have a certain amount of omega-3’s in them. Now we concentrate [research] on the brain and the heart because those are organs that have a higher concentration. But all our cells need these fats in them.”

Of course, most 19th-century snake oil salesmen did not, in fact, sell this particular product. Even those hucksters who did sell actual snake oil would likely have sold the rattlesnake variety, nearly useless for any ache-relieving medicinal purpose. But the original Chinese purveyors of snake oil offered something that probably did exactly what they claimed it would do: help fellow workers relieve the pain of their labours.