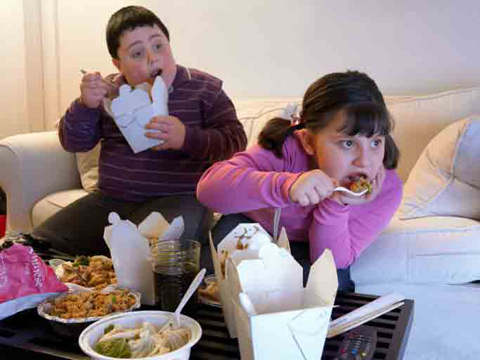 Families of Today Bond in Front Of The Widescreen TV

Eating in front of the TV. The TV room has become today’s dining room, have you noticed? Did you know that the television has taken over from the dining room table as the hub of the family life? A recent study has revealed this to be a fact. Incredible but true, researchers found only five hours a week are spent eating together now with double that amount of time spent in front of the flat screen. This study also found that families now ‘bond’ during reality TV shows such as “Dancing on Ice” and “I’m A Celebrity”.

Eating While Watching TV Leads To An Increased BMI

Eating whilst watching TV is not the best, little attention is paid to how foods are chewed, and we all know the stereotype of the couch potato: Somebody who sits on a couch, eats chips, chocolate, TV dinners and is generally lazy, and who only gets off the couch to grab more beer or a take-away. But wait up, what about the child who sits in front of the screen, night after night? Increased television viewing is directly correlated to a higher BMI, or body mass index.

Why is that? Well, a study undertaken by the Johns Hopkins University in Baltimore have revealed that most people wrongly estimate how many calories they are consuming when they watch TV and eat simultaneously. And if watching TV makes it difficult to know how much you are really eating, you’re much more likely to overeat if you eat in front of that TV screen than if you eat quietly at your dining room table. That means more fat and calories, less chewing, quicker eating, little attention paid and as a consequence – much more of a chance that you’ll eventually be significantly overweight or obese—all because of that regular soap, hospital drama, DVD or criminal series you just can’t live without.

Watching shows together gives people something in common to talk about and brings them closer together amid a shared experience, a study has emerged. A large percentage of families polled admitted they ‘obsessively’ watch the same shows and are hooked on the tube.

These statistics have emerged in a Warner Home Video study of 3,000 British families, of which more than half admitted the television now took center stage for them. Ian Fullerton, Marketing Director of HBO Entertainment said: ”Watching TV has well and truly become a popular past time over the past 5 years, even with the emergence of downloads”. ”Families have said they would stay up past their bed time to watch more TV together, turning down nights out in favour of staying in and watching their favourite TV shows.” Nearly half of all families have admitted watching recorded TV shows together, with nearly half saying they have marathon sessions where they watch episodes back to back.

Twenty five percent of parents even admitted sending the kids off to bed early to ensure they secured enough time to watch their favourite TV shows. More than thirty percent said they had felt obsessed with certain TV shows and one in five said they thought of their favourite TV characters ‘as friends’.

The report also found many believe their partners have an “unhealthy obsession” with their favourite TV shows. Men were more likely to worry about their wives obsessions.

Seven out of ten said they had felt “sad” when they came to an end of their favourite TV series and that they missed the characters.

Eric’s view:
It is rather sad to see that more and more families are becoming so “tied to the tube”. TV once used to be entertainment at night, but in the 21st century it has literally become THE hub of family life. Wide screen TV is now so cheap and readily available, that most families have several. What does the future hold for eating a meal around the dining room table?  I’ve got to go – my favourite TV show just started…