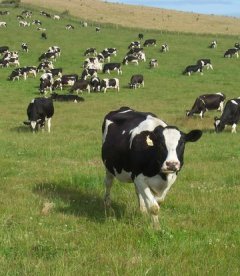 Why dairy for calcium? We live in New Zealand, the land of the cow. We are fed the idea that “dairy products are great for health” and that “milk will save our bones” But is this true or perhaps we are we being conned?
This hot as a potato topic will scrutinise whether calcium supplementation assists those with osteoporosis, and whether milk should be drunk daily or our bones will crumble like the lady on TV tells us.
Thousands of New Zealanders who take calcium supplements in the hope of lowering their risk for bone fractures may actually be increasing their risk of having a heart attack, research suggests. But other experts are not so convinced, saying that there is only a tiny increase in risk. But, has the long term link between those who consume large amounts of dairy products in NZ and an increease risk of cardiovascular or bone disease been studied?Doctors for many years have prescribed calcium carbonate (similar to plain old chalk) in the belief that it may assit their patients who require calcium supplementation. Not only is this a naive way of thinking, it may prove to hazardous to their patients health. I have always known it to be not correct to give large doses of an “unopposed” mineral to my patient, and have never done this. That is, without being balanced with other minerals, such as magnesium. In general, a large dose of a single mineral may cause deficiencies of other minerals. Individual mineral supplements should, therefore, usually be “backed up” by a multiple mineral supplement.Calcium is not found in nature (in edible form) without magnesium, and they therefore should always be given together, preferably two parts of magnesium to one part calcium. Some studies show that calcium alone may even be preferentially laid down in arterial walls rather than in bones, and that doesn’t sound good, does it? As you can see, taking supplements with poor advice, or from those practitioners with next to no knowledge in nutritional medicine may be hazardous to your health, maybe more so than driving your car. Natural medicine is safe medicine? Think again. Get expert advice from somebody in the know. Naturopaths are not qualified to and don’t prescribe pharmaceutical drugs, similarly, medical doctors shouldn’t prescribe minerals, herbal medicines or other natural medicines without the proper training. End of story.

“Our hypothesis when we started the study was that calcium would protect the heart,” Reid said. Dr. Reid was not really convinced, so along with researchers from University of Aberdeen in the U.K. and Dartmouth University in America they combined and analyzed research findings of 11 different randomised trials in which participants took 500mg calcium supplements (or a higher dose) daily without taking Vitamin D.The researchers made adjustments for the differences in study design and came to the conclusion that calcium supplementation was only associated with a small increase in heart attack risk, but was not associated with an increased risk of stroke or heart disease.

Dr. Reid set out to prove that calcium supplementation may rapidly elevate blood calcium levels contribute to arterial disease. It did become apparent that calcium from food sources is absorbed much more slowly. Funny that, how healthy foods through an expensive “scientific” study are proving to be more beneficial. Dr. Reid states that he “encourages patients to get their calcium from the foods they eat rather than supplements. Dr. Reid should have gone further and examined the link between milk consumption and hip fractures.

My father always used to say “the truth is stranger than the fiction”. My concern is that women are told the fallacy that “milk will protect your bones from crumbling” and that New Zealanders need to drink milk daily. Bollocks. The countries with the highest levels of milk, butter, cream and cheese intakes also appear to have the highest levels of osteoporosis, heart disease and several other chronic degenerative “modern” diseases of civilisation. Let’s get this debate going folks – cow’s milk? Who needs it

Worldwide, the highest rates of hip fractures are among populations that consume the most animal food (including dairy products) like people from the USA, Canada, Norway, Sweden, Australia, New Zealand. 2, 3  The lowest rates are among people who eat little or no dairy foods (these people are on lower calcium diets) like people from rural Asia and rural Africa. 2, 3 An interesting web page with 65 references on why milk may be hazardous to you health is The Dangers of Milk and Dairy Products – The Facts. By Dave Rietz

Osteoporosis is caused by several factors; however, the most important one is diet; especially the amount of animal protein and acid in the foods we eat.4, 5, 6 The high acid foods are meat, poultry, fish, seafood, and hard cheeses, parmesan cheese is the most acidic of all foods commonly consumed.7

Once consumed, this food-derived acid must be neutralised in the body. Fruits and vegetables can do this neutralising (these foods are alkaline in nature). However, because the diet of the average Westerner is so deficient in fruits and vegetables and so high in acid foods, the primary neutraliser of dietary acid becomes their bones. The bones dissolve to release alkaline materials.

All I see is misery with the little children brought to me on an almost daily basis, many are not breastfed for long because their mother has to go to work. They get introduced to a “Fontera Formula” and bingo – allergy in the making. The solution? – antibiotics. Long term these drugs wreak havoc with tiny bowels, beneficial bacteria are destroyed and the child develops a bowel problem leading into food allergies. The solution? More antibiotics as the child becomes more ill over time, genereally in the form of recurring ear, nose or throat infections.

Good food sources of calcium include dairy products, calcium-fortified fruit juices, and green leafy vegetables (except spinach).   Commonly used calcium supplements are calcium carbonate (40% calcium), calcium citrate (21% calcium), and calcium citrate malate. Calcium carbonate is poorly absorbed by individuals with hypochlorhydria, whereas calcium citrate is well absorbed by such individuals. Absorption of calcium carbonate by people with normal gastrointestinal function appears to be adequate. Hydroxyapatite (from bone meal) is also used as a source of calcium; whether this form provides advantages over other sources of calcium is not known. Poor dissolution of tablets has been found to be a problem with some calcium preparations.

The Calcium-Bone Link is ‘Weak’

On studying the Meta alnalysis linking calcium supplementation to heart attacks, cardiologist John Cleland of the U.K.’s Hull York Medical School called the analysis “concerning but not convincing”. “Heart attacks are serious business, so you would expect to see an increase in mortality in supplement users along with heart attacks,” said Cleland, who further stated that  the evidence that calcium or calcium with vitamin D protects against bone fracture is also “far from convincing”.

Dr. Cleland and colleagues mentioned that calcium supplements alone do not prevent fractures and may even slightly increase fracture risk. The amazing thing is that Dr. Cleland said that “people with osteoporosis should be taking drugs not supplements, to treat the disease”. Why does not Dr. Cleland study people in countries with little to no osteoporosis to see what they are doing that we don’t. Why are drugs always the “solution”, there appears to be very little talk about diet or lifestyle intervention with “evidence” based medicine. There certainly is plenty of evidence that osteoporosis exists in New Zealand, and not enough research into the real causative factors. Too much emphasis on intervention and treatment, probably too easy, and profitable.  Dairy food for thought?

Next Post: Eat More Vegetables Not Fruits For Brain Health