Do You Frequent The Golden Arches?  You May Be Ready For The Pearly Gates

Are you still eating at McDonalds? Why? A New York woman has published photos online regarding a McDonald’s Happy Meal, revealing how it has resisted decomposition after sitting in her house for six months. Artist and photographer Sally Davies began documenting the Happy Meal she brought in April and uploaded her shots of the meal each week to Flickr. After six months of photographing the meal on her kitchen bench, she found a shocking result. The burger and chips remained the same and had not grown mould.
How can food like this be “nutritious” and beneficial to your health? Do you eat at McDonalds? Perhaps it is time you viewed the classic film “Super Size Me” regading a guy who lived on McDonalds for weeks and was advised by his doctor to stop because his liver function was found to be compromised after regular blood testing.
Sally Davies: “The only change that I can see is that it has become hard as a rock,” she told the Daily Mail. “The food is plastic to the touch and has an acrylic sheen to it,” she says. The project began when Davies heard a story about a rigid burger and when a friend said it wasn’t true, she wanted to prove them wrong. McDonald’s spokeswoman Theresa Riley refuted her claims saying, “Our hamburgers are cooked and prepared with salt, pepper and nothing else – no preservatives, no fillers. “Our hamburger buns are baked locally, are made from North American-grown wheat flour and include common government-approved ingredients designed to assure food quality and safety.
You make up your own mind – and if you feel that is is perfectly acceptable to be eating foods which don’t decompose, ask yourself this question: “why not?”  What is in this food to keep it looking so good? There has got to me more than “nothing else” 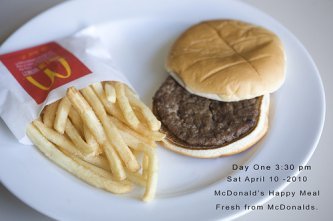 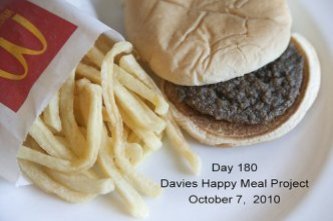