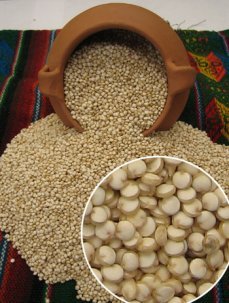 Have you ever tried quinoa? I first tried quinoa several years ago but started to eat it more over the past two years in particular.  I love this tiny white coloured birdseed called quinoa, and have become used to cooking and eating it over the past few years. It is a grain that satisfies my taste buds as it has its own subtle yet distinct taste. This tells me that quinoa will end up one of my favourite foods, just like avocado became one after I began to appreciate the subtle flavours of the avocado flesh.

Once you get into the habit of eating and snacking on fresh and wholesome foods like quinoa, avocado, and olives your tastebuds and sense of smell will develop a lot. You will find that confectionary like chewing gum and even chocolate in time will lose its sparkle. Who knows, you may even end up ridiculously healthy one day!

Quinoa is pronounced “keen-wa” and is a complete protein grain, meaning it contains all the essential amino acids required each day. Did you know that quinoa contains 50% more protein that wheat? When cooked, quinoa expands to four times its volume. This amazing grain contains plenty of nutrition including lysine, iron, phosphorus, vitamins A, E and B as we as almost double the calcium of most other grains.

Quinoa is from South America

Quinoa originated in the Andean region of South America, where it has been an important food for more than 6,000 years. It grows best in well-drained soils and requires a relatively long growing season. It is susceptible to a leaf miner that may reduce crop success; this leaf miner also affects the common weed Chenopodium album, but this species of Chenopodium is much more resistant.
Similar Chenopodium species were probably grown before maize agriculture became popular. Chenopodiums were also used in Europe as green foods.

(Chenopodium album) which has a widespread distribution in the Northern Hemisphere, produces edible seeds and greens much like quinoa, but in lower quantities. Caution should be exercised in collecting this weed in the wild, because when growing in heavily fertilised agricultural fields the plant can accumulate dangerously high concentrations of nitrates. (and probably cadmium as well from NPK fertilisers)
Quinoa is an easy food to prepare, has a pleasantly light, fluffy texture when cooked, and its mild, slightly nutty flavor makes it an excellent alternative to white rice or couscous.

Like any grain from a thirld-world country, always wash carefully. It is not unheard of for quinoa to contain tiny pebbles or grains of sand. While the processing methods used in the commercial cultivation of quinoa remove much of the soapy saponins that coats quinoa seeds, some people believe that it is a good idea to thoroughly wash the seeds to remove any remaining saponin residue. An effective method is to run cold water over quinoa that has been placed in a fine-meshed strainer, gently rubbing the seeds together with your hands, or rinsing it in ample running water either in a fine strainer or in cheesecloth. To ensure that the saponins have been completely removed, taste a few seeds. If they still have a bitter taste, continue the rinsing process.

A common cooking method is to treat quinoa much like rice, add one part of the grain to two parts liquid in a saucepan. After the mixture is brought to a boil, reduce the heat to simmer and cover. One cup of quinoa cooked in this method usually takes 15 minutes to prepare. When cooking is complete, you will notice that the grains have become translucent, and the white germ has partially detached itself, appearing like a white-spiraled tail. If you desire the quinoa to have a nuttier flavor, you can dry roast it before cooking; to dry roast, place it in a skillet over medium-low heat and stir constantly for five minutes.

Since quinoa has a low gluten content, it is one of the least allergenic “grains,” but its flour needs to be combined with wheat to make leavened baked goods. Quinoa flour can be used to make pasta, and quinoa pastas are available in many natural foods stores

Being secondary only to the potato, and followed in third place by maize. In contemporary times this crop has come to be highly appreciated for its nutritional value, and the United Nations has classified it as a super crop for its very high protein content (12%–18%). Unlike wheat or rice (which are low in lysine), quinoa contains a balanced set of essential amino acids for humans, making it an unusually high protein complete foodstuff. This means it takes less quinoa protein to meet one’s needs than wheat protein. It is a good source of dietary fiber and phosphorus and is high in magnesium and iron. Quinoa is gluten free and considered easy to digest. Because of all these characteristics, quinoa is being considered as a possible crop by NASA, for long-duration manned spaceflights.

Lastly, quinoa may be germinated in its raw form to boost its nutritional value. Germination activates its natural enzymes and multiplies its vitamin and mineral content. In fact, quinoa has a notably short germination period: only 2-4 hours resting in a glass of clean water is enough to make it sprout and release gases, as opposed to, eg., 12 hours overnight with wheat. This process, besides its nutritional enhancements, softens the grains, making them very suitable to be added to salads and other cold foods.

There are many ways you can serve up this tasty grain, I like to just simmer it in a little beef of chicken stock and have it as a side serve instead of rice occasionally.