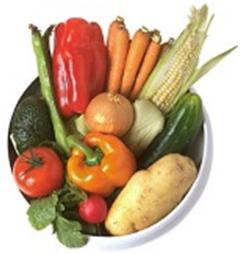 Eat more vegetables not fruits for brain health. An interesting study has found that Eating vegetables, but not fruits, can help slow the rate of mental decline in older adults. Researchers1 studied more than 3,700 senior citizens, who completed food frequency questionnaires and two or more cognitive tests over the course of  six years.
Those who ate 2.8 servings of vegetables a day or more slowed their rate of cognitive decline by roughly 40 percent, the equivalent of about five years. Green leafy vegetables had the strongest effect, and the older the person, the greater the slowdown in mental decline.
Fruit consumption was not associated with cognitive change, which may be due to the fact that vegetables contain higher amounts of vitamin E. Vegetables are also often consumed with fats such as salad dressings that increase the absorption of vitamin E.

Eric’s Comment
How frequently do you hear the media tell you to eat more fruits and vegetables?  The Ministry of Health advises that people should eat at least five portions of fruit or vegetables a day to help reduce the risk of cancer, heart disease and other chronic conditions.

When you take a good look at the New Zealand apple, many such as the Pacific Rose are bred for just looks and their sweet taste, and certainly not for nutrition. Many New Zealanders will try to eat the fruits and skip the vegetables. Many have listened to this advice and are applying it, fully believing they are following a healthy diet by eating lots of fruit. Unfortunately, for many people this simply isn’t true. Although fruits can provide benefits, especially the skins and seeds of fruits, they are typically not as healthy as vegetables, which are often packed with minerals and many phytonutrients. The other dilemma in New Zealand is that many fruits are imported, having being picked and artificially ripened in transit like bananas.

British Not Keen On Fruit And Vegetables

Interestingly, a recent study by the British marketing group TNS found that only 12% of the British population are adhering to 5 per day the target, and another 12% eat no fruit and vegetables at all! TNS analyzed the spending habits of 25,000 households and the nutrition labels of 100,000 food and drink products bought from supermarkets. On average, TNS found, Britons are consuming just 2.5 daily portions of fruit and vegetables. Children and the less well-off are most likely to fail the target, with the more affluent and those aged over 45 more likely to meet the guidelines.
The next time you hear someone encourage you to eat more fruits and vegetables, immediately shift it around and switch it to more vegetables and fruits, which is clearly the more technically correct statement.
Eating more vegetables is the key to reducing your brain’s typical decline as you age. Vitamin E may be a factor, but it comes as no surprise that green leafy vegetables, high in folic acid, were the most effective natural foods of all. Folic acid is necessary in the synthesis of many important components of the nervous system, including:
• Neurotransmitters
• Myelin
• Phosphatidylcholine
Incidentally, Brewer’s yeast is an exceptionally high source of folic acid, with each 100gr containing an amazing 225mcg.
Additionallly, high levels of homocysteine in the blood have been associated with a decline in cognitive ability in the elderly. Homocysteine levels are known to rise when you are deficient in folic acid and Vitamin B12.
One easy way to consume the number of vegetables you need is to juice them, and then to add a litle of the vegetable pup back to the juice to give you some more fibre back. There are valuable and sensitive micronutrients that are damaged when you heat foods, so try to eat something raw each day, even if is is a carrot, capsicum or a salad. Cooking and processing vegetable destroys these valuable micronutrients by altering their shape and chemical composition. If you juice them instead, you will preserve the micronutrients and get their full health benefits.

Four main reasons why you want to consider vegetable juicing